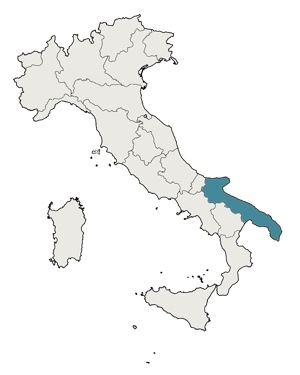 Puglia is situated in the  ‘heel’ of Italy. Through the centuries the culture has been influenced by the Greeks, Normans, and Byzantine.
The Appian Way linked this part of Italy with Rome – and the spread of Latin culture in art and architecture.  There is a great variety of architecture with Lecce a triumph of the Baroque period; Gothic churches and the picturesque countryside dotted with curious trulli houses; Rococo balconies and Art Nouveau buildings.  Next to the region of Puglia is the region of Basilicata and Matera a city on a rocky outcrop comprising of complex cave dwellings carved into the mountainside.  Evacuated in 1952 due to poor living conditions the city has now been painstakingly restored.   The Pugliese countryside is predominately flat and fertile producing the largest amounts of olive oil and wine in Italy.  A popular herb is Mirto, found near the Mediterranean Sea and is delicate and strong like the people who share with us their unique cuisine created from ancient recipes handed down from generation to generation. Old crafts from needlework to pottery can still be seen along with delicate ‘papier-mâché’ work!

Accommodation in 5- and 4-star quality hotels all with modern conveniences, situated in the heart of Lecce and Matera.  In Fasano a 5-star quality hotel, which in the 16th century was a watch tower that became fortified following centuries of Saracen attacks; then a ‘masseria’ being a working farm with its own village and chapel.  All hotels are personally selected for their location, character, and hospitality.  Daily dining in typical restaurants including all breakfasts and 13 lunches or dinners incl. cooking class, tasting local cuisine and wines;  luxury transport by coach, all luggage handling, gratuities, entry fees, professional guides, transfers - as described in detailed itinerary.

Share Twin NZ$9325 per person
(excluding airfare - to be purchased from agent of your choice)
Single Supplement: NZ$2,775 for a double room for single use

Contact us to receive a detailed itinerary.
Please don't be disappointed – register your interest now for 2022 itineraries!