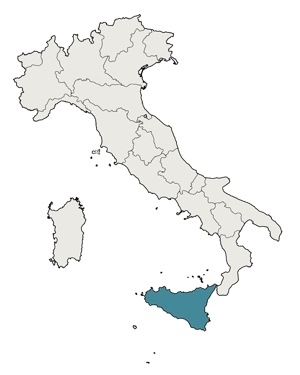 Susan and John will meet you in Palermo.
The Island of Sicily is Italian with a fascinating cultural mix having been ruled by Asians, Africans and Europeans - they say that Sicily is the world's first multicultural society!! Thirty centuries of history expressed in the Classical, the Romanesque, the Gothic and the Baroque. Sicily is a unique island full of art, archaeology, history, folklore and breathtaking scenery. And, of course great food!! The Sicilian cuisine shows traces of all the cultures which established themselves on the island. The cuisine is, undoubtedly, Italian based with Spanish, Greek and Arab influences. Sicilia is an island that basks in the sun and is home to golden beaches and orange and lemon orchards, majestic mountains and the natural wonder, Mount Etna. Each region offers something different. In the north east we find lush forests. In the central regions we find vineyards, ancient olive groves, hardy almond orchards, wheat fields and prickly pear about to flower. During summer the land is amber under a sky of blue.

Accommodation in 4 and 5 star quality hotels, all with modern conveniences, situated in the historic centres. In Palermo, you will be accommodated in a magnificent aristocratic residence from the 18th century; a restored 'palazzo' on the Mediterranean; on the waterfront of Syracusa in a typically Sicilian neoclassic designed hotel; in Taormina a villa, built by an aristocratic family in 1830 among lush, subtropical gardens on an enchanting bay with views of incomparable beauty. All hotels are personally selected for their location, character and hospitality. Daily dining in typical restaurants including all breakfasts and 12 other meals, tasting local cuisine and wines, luxury transport by coach, all luggage handling, gratuities, entry fees, professional guides, transfers - as described in detailed itinerary.

Share Twin From NZ$12,945 per person
(excluding airfare, to be purchased from your travel agent)
Single Supplement: NZ$3,445 for a standard double room for single use

Contact us to receive a detailed itinerary.
Please don't be disappointed – register your interest now for 2022 itineraries!